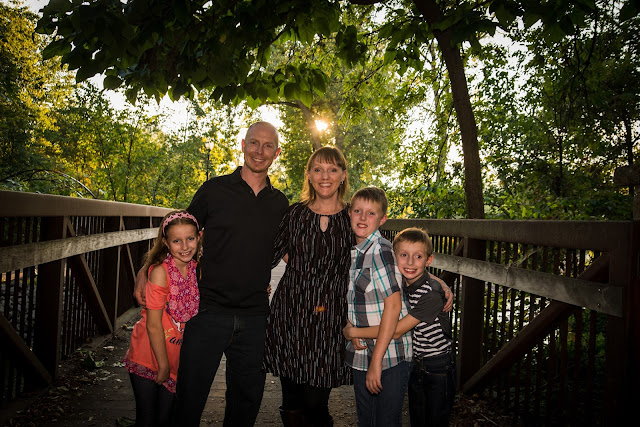 I wanted to write a moving and inspirational post about celebrating my two-year post-transplant milestone. (I also wanted to post a nice family picture, where everyone was looking at the camera, the twins did not have to be separated because they were hitting each other, the shorter boy on the right was not squeezing his brother's stomach too tightly, and I did not have a glowing bulb of sunlight shining brightly on my lady parts, but well... you know... that's life.)

Instead I will share one of my favorite pictures of this day. We had wanted to do an outdoor autumn photo shoot with my family (grandparents included). It was scheduled for the end of September in Chicago. So of course, I bought (matching) long-sleeved shirts for the boys, had a pretty (color-coordinating) sweater picked out for my girl, Keith was going to wear his grey pullover, and I lovingly pulled out my tights and boots for what I thought was going to be a cool and beautiful fall day.

So after numerous fights with all three males in the house that no, shorts were NOT going to be allowed, we ended up hot and sweaty, with this mismatched, uncoordinated outfit situation. And don't forget three kids who would rather throw leaves in the air and rocks in the river. My main goals were no longer looking cute and put together, but rather: keep the girl out of the river (she has a tendency to fall into bodies of water) and keep the boys from throwing acorns and walnuts at each other, their cousin, the photographer... you get the idea.)

That's the thing about life. You never know what's going to come your way, be it a 90-degree day in September or a phone call saying your kidneys are failing and you need a transplant. Whether you run and hide when something unexpected comes up, or you run forward and fight because you have so much to live for, you have to make a move.

My life these days isn't very different than it would be had I not had a transplant. I still go to work, transport kids from sport to sport on Saturdays, go to church on Sundays, and fail at the never-ending job of housecleaning and laundry. However, I do have a different kind of appreciation for life. For the life lost, so that I could live. For the stronger faith so I could accept what was being thrown at me. And for the greater appreciation of the little things in life - those little things that others think are the big things. It's important to pay attention to those things, to those people. I read a post once where the author talked about saving candles and soaps for important occasions, but instead she had a closet full of sweet-smelling things and a shortened lifespan due to cancer. Burn the candles, she said. I was once like her. But not so much anymore.