April 11, 2011
Friday night was the pre-shop for my twins' club resale.  I was able to get Connor most of his summer clothes, a couple cute outfits for Keira, and a new pair of Handy "Hammy" (Manny) pjs for Colin.  He is quite obsessed with his current pair, that is only about 2 sizes too small. I've been sick with a cold, so Keith was nice enough to let me sleep in on Saturday (although that's quite hard with the kids downstairs), but after I got up, he headed to do some errands.  We just hung around the house, until my parents dropped off my nephew.  4 kids, 4 and under - how fun! ;)  Actually Reid is quite well-behaved, probably because our house looks like Toys-r-us to guests.

﻿ ﻿ On Sunday, after Keith went grocery shopping and for his run, I went for my own run.  I'm training for my first 5K in May, and have only ran outside a couple of times, both times the weather was about 50 degrees.  Brrr......  Anyway, I'm working up from one mile, so I was pleased as punch to run two miles in about 20 minutes.  The first mile was done in about 8 1/2 minutes!  I can't believe it. Keith took the kids to get me Starbucks while I showered, then we headed off to a new park.  I forgot my camera, so you will have to make do with what I took on my phone: 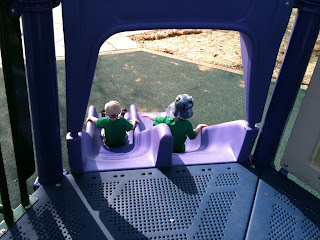 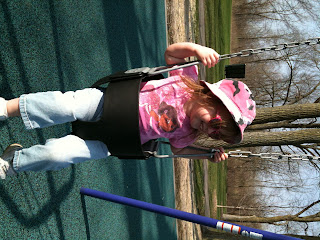 When we got back, Keith made us lunch - tomatos and mozzarella on ciabatta bread, then headed out to work on our "new" front yard.  (Pictures soon!)  The weather was really nice, although in the afternoon, it was quite hot.  Our backyard is in full-sun, so we stayed inside for awhile trying to get the twins to nap.  Yeah, not so much.  Colin finally fell asleep lounging on the back of the couch, but Keira refused to even sit down.  Grammy and Aunt Diana stopped by before dinner, so the kids were pretty happy to play with them.  Keith grilled steak for supper, which Colin ate, only as long as he could dip it in ketchup first.

My one complaint about nice weather and spending a lot of time outside - inside chores aren't getting done! I've got way too much laundry to catch up on tonight!

Annie said…
Wow, you had a busy weekend. Can't wait to see pictures of your yard.

We are trying to do lots of works on our patio (front and back) but it too much.