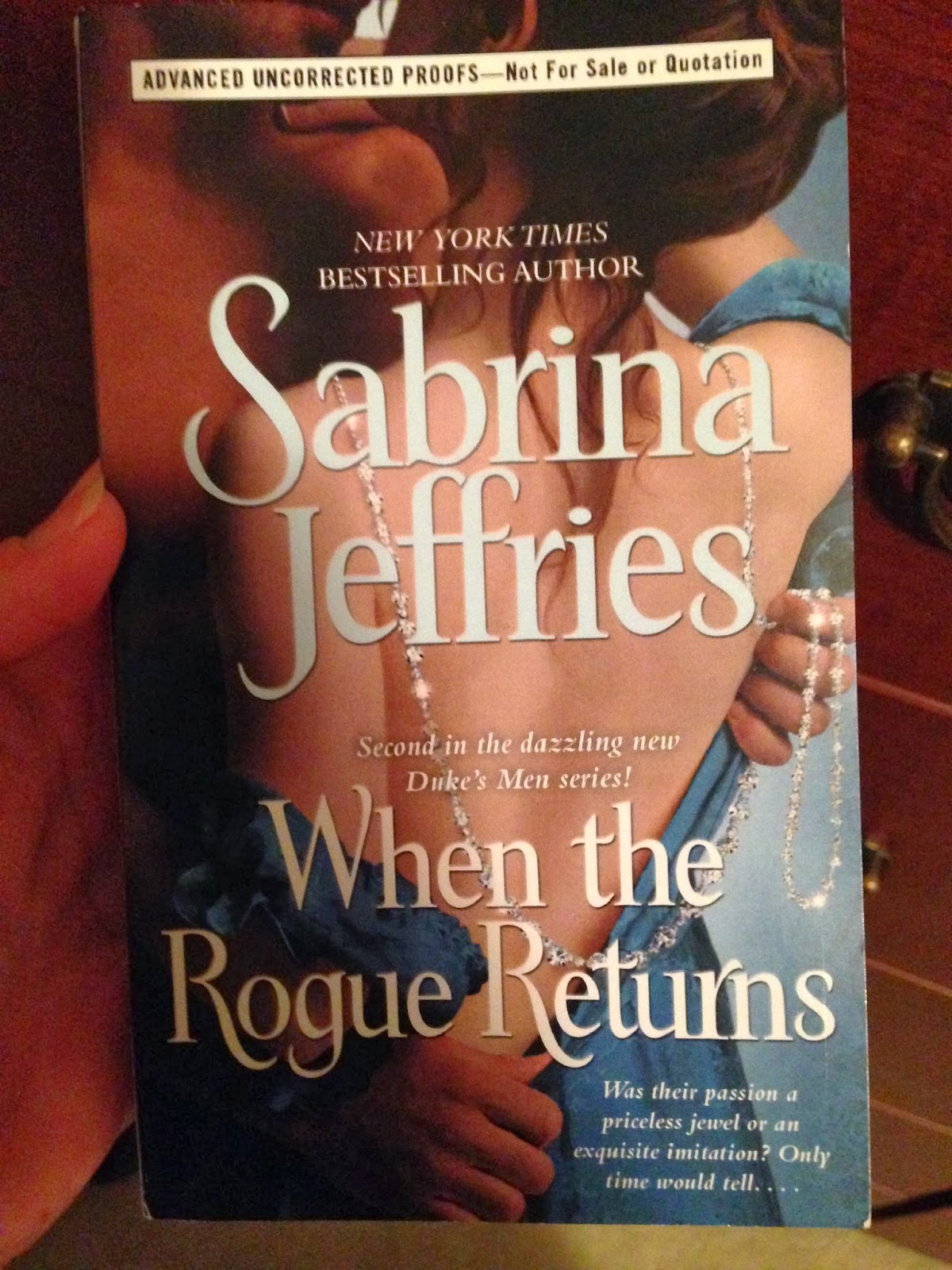 I was lucky enough to win an ARC of When the Rogue Returns from Sabrina Jeffries herself! I couldn't wait to read it.  After reading the first book in The Duke's Men series, What the Duke Desires, I was excited to see that this next book was about Victor Cale.

Victor and Isa's first meeting was great! Both blame the other for the missing jewels, and both are greatly suspicious of the other's motives.  Despite their renewed feelings of passion and love for each other, they just cannot get over their extreme fear that the other is lying.  Victor, however, grows jealous of another man in Isa's life, and Isa fights her own feelings for Victor.  Once they both realize they were framed for a crime neither committed, they must work together to find the real thieves and make sure justice is served.

I love how Sabrina Jeffries is able to mix romance and mystery together to create an amazing chemistry between Victor and Isa.  As they struggle to come to terms with the truth, you sense how they are still haunted by their vulnerabilities.  I think that's what I liked most about the book - they both seemed so innocent and honest, yet also so tortured by the incidents of the past. It wasn't just two random people fighting feelings of lust for each other, rather it was two people joined by marriage yet torn apart by another person's lies.

When the Rogue Returns will be released on January 21.  I highly recommend it.  I was lucky enough to also receive an autographed copy of What the Duke Desires, signed by Sabrina Jeffries!  In anticipation of the upcoming release, I am giving that copy away here to one lucky winner.  Good luck!

erin's blog said…
I would like any historical romance books and a trip to England to experience the land
January 18, 2014 at 7:52 PM

Anonymous said…
Love anything that has to do with books, so Kindle, book or gift card to buy books works for me.
January 18, 2014 at 8:05 PM

Anonymous said…
Sabrina Jefferies is one of my goto authors! Excited about this series! Thanks for the chance and the peak at the new book.
January 18, 2014 at 8:06 PM

Anonymous said…
Books are always welcome, but a gift card is better, so I can get the ones at the top of my Wish List. Best gift is a trip to someplace special we have always wanted to visit, like Scotland, Ireland, and England. That, of course, is less likely to happen than the books or gift certificate.
January 18, 2014 at 9:39 PM

Denise said…
Books, of course! I love receiving them and they are my preferred gift to give someone!
January 18, 2014 at 9:41 PM

Unknown said…
Books, books, and more books...just in case no one buys me books, I buy my own...

Unknown said…
Now if you have an autographed new copy of Sabrina Jeffries's book, why on the earth would you giveaway? Myself, not on this life. That would be one of my few treasures indispensable. My best to you.

bbkmt said…
An amazon gift card so that I can get books that I want! My mom and my daughters both got me cards this year so I was having a lot of fun picking and then reading! Sigh, what a wonderful gift!

susanbeamon said…
books and chocolate, plus a nice chair to sit in and read with a pretty table for the chocolate to sit on until it's eaten and a tall lamp so I can read at night.
January 19, 2014 at 7:49 PM