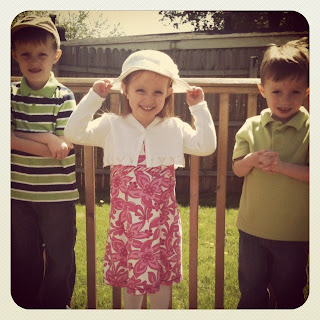 I know it's a mother job to worry about her children. But this morning, it hit me. I need to do something fast before it's too late. This situation is getting out of control.

It all started on the way to Connor's school. The radio was tuned into this not-very-local classic rock station that only sometimes comes in.

Connor: Mommy, can you turn on a good song?

Me: Daddy listens to horrible music. This is classic Guns N' Roses. Besides your daddy grew up with heavy metal and only recently started getting into that pop junk music on KISS FM. I told you the other day when you asked me to turn off Pink Floyd that we only listen to Mommy's music in the morning.

Connor: Well can you turn on horrible music then?

****
I've have a very eclectic taste in music. I love CCR, Pink Floyd, Bad Religion, Type O Negative, Pearl Jam, Adele, The Cure, and Rise Against. I love heavy metal like Five Finger Death Punch, southern rock like The Band, folk rock like Dylan, and whatever kind of rock the Lumineers play.  If you look at my spotify playlists, you would think I had numerous personalities based on the diversity of songs.

It's not that all pop music is bad. But when you hear your 4 year old daughter singing her own version of some of these songs, you begin to worry. (And laugh, because she is hilarious.)

Or how about Colin, dancing around in the kitchen to Pitbull's "Back In Time". (Which technically is a good song since it's got the Dirty Dancing song going on.  And sure, Pitbull is nice to look at, but wait, I digress...)

I just don't want my kids to grow up thinking that Daddy's music is best. Because seriously, as I've stated to him time and time again, his music sucks. Mine rules. ;)

Tamara Camera said…
I am so scared of this! My kids are still a little too young for strong preferences but I shudder to realize they'll probably go through the bizarre phases we all went through. However we came out on the other end and what's my favorite music? The same classic rock my parents drilled into my head when I was very young.
March 21, 2013 at 12:56 PM

Jessi said…
Oh my goodness, this made me laugh. I swear I hate my husband's taste in music....he likes Disco and weird 80's music (not the good 80's rock stuff). It drives me nuts. Thankfully, so far my son seems to like more my type of music...Aerosmith, Guns-n-Roses, Lynard, and of course some CCR. ;-) Good luck to keeping good music in your household.

Nicole @ Pencil Skirts and Noodle Necklaces said…
Adorable conversation and music lyrics!!! Thanks for stopping by today!
March 21, 2013 at 9:31 PM