Things Kids Say (aka How my kids embarrass me) 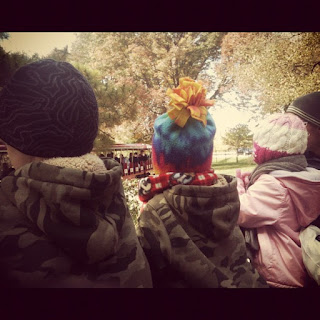 We live in a town with a fairly large Spanish-speaking community. It's been that way for as long as I can remember. On Sunday, we were at a pumpkin festival and on a hayride. Another family, who was only speaking Spanish, was on the other side of the wagon.

As we were getting off, Keira announced loudly - "Mommy! Those people are speaking Spanish!"

Connor got really excited. "I can speak Spanish too! Uno, dos, tres...."

The dad laughed and told him he spoke Spanish well.

Yes it was cute.

But yes, I was still embarrassed. ;)

Becoming Supermommy said…
Don't be embarrassed! Your kid was showing off how much he understands about other peoples' cultures, and that is a wonderful thing! I'm sure they were flattered that a little boy on a hayride wanted to relate to them, not embarrassed at being outed. :)
October 10, 2012 at 9:25 AM