July 13, 2012
The thing about summer is that rules tend to fall by the wayside. Well, at least I'm trying to let them fall. Just a little.

Keith had an impromptu doc appointment for his back come up a couple weeks ago. Connor had already asked if he could stay at Nana's for dinner.  My mom invited the rest of us to come as well.

We never do this. Mainly because when you throw the twins out of their routine most of the time, all hell breaks loose. We try to be strict about bedtime and staying at home on nights when they have school /daycare the next day since they have to get up so early to go (5:45 a.m.!)

But since Keith wouldn't be home for dinner anyway, I said ok.

And I'm so glad I did. The kids had an absolute blast. We had planned on leaving after dessert (popsicles - again, something we don't normally do on school nights), but my uncle showed up with a squirt bottle. Chaos ensued as each kid was given a squirt bottle or water gun.

Maybe I should have added "Impromptu dinners at Nana and Bumpa's house" to our bucket list??? 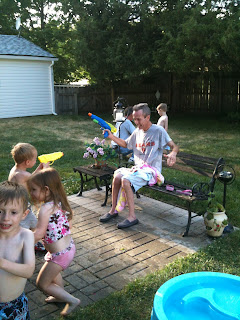 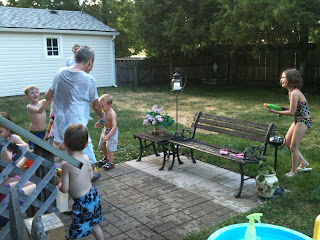 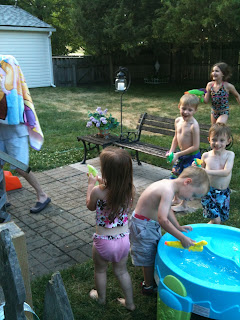