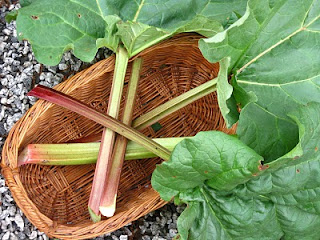 Last Tuesday, my 86 year old grandma passed away.  It had been a hard year for her and the family.  She had suffered a stroke on Christmas Day, and since then had not rebounded like she had done in the past.  She broke some of her ribs when she fell during the stroke (she fell down the stairs).  A few weeks later, she fell again (possibly stroke-related) and broke her wrist. She suffered a long case of pneumonia, as well as kidney failure and other health issues.  We knew it was coming, but it was still a very sad event.

Her wake was Thursday and the funeral was on Friday, at the church where she grew up. As with my grandpa's funeral, we were able to drive the funeral procession past the house where she spent 54 years married to my grandfather, before his passing in 2006.


At the funeral Mass, the priest talked about Gigi's love of rhubarb. It was very sweet to hear him talk about it.  He handed out a holy card that had some flowers at the bottom. When he had presented the cards to the grade school children last Easter, one of the kids asked what those flowers were. Another child pipped up and said: Rhubarb!  The priest remembered that, and thought it was appropriate to hand out the cards at the funeral in memory of a woman who loved to grow and bake with her rhubarb. There was a large garden in the backyard that always had a ton of rhubarb.

Ironically, the day before, as I was home alone getting ready for the wake, I noticed a car pull up and park in front of our house.  An elderly man got out, smoothing his shirt as he walked slowly up our driveway and knocked on the door. He introduced himself and said that he noticed we had a large patch of rhubarb growing on the side of our garage. (It was there when we moved in, yet other than eat a few stalks each spring, I don't do anything with it - never had too - Gigi always did the baking!)

He asked if I would mind if he took some.

Of course not, I said. Help yourself.

In the six years that we have lived in our house, no one has ever came asking about our rhubarb.

I can't help but think it was a sign from Gigi,
letting us know she is okay up in Heaven,
finally dancing again with Grandpa.