January 10, 2012
I had big plans to post today about Connor's new bed that Daddy built.
Unfortunately, those pictures are still at home, on the camera.
When we moved into our house, we were on the five year plan: live here until Connor turns 5, then move to a bigger house.  Well life (and recessions) happen, and the move did not occur.  Since we were undecided for awhile, we kept Connor in his extremely slightly outgrown toddler bed.  Keith built Connor a new twin bed to match his dresser over Christmas, and it was ready this past weekend.  Of course, you won't get to see those pictures until someone gets her stuff together and uploads the camera.
Instead, you can see the twinkles showing each other some love in Connor's old bed before we took it apart: 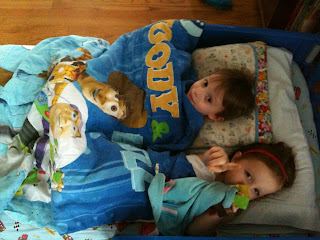 Don't let them fool you.
They are just pretending it's nap time.
They don't nap time.
(Sigh. I miss nap time...)
But this picture does make me happy.

My kids always gave up their naps pretty young...But they went to be early, which was a nice trade off!