How Mice Make Me Happy

September 27, 2011
Halloween is coming soon, and we are Halloween people in this house.  For 3 years, I've tried to get a theme going with the kids' costumes.  And for 3 years, I've had opposition from the troops.

The first year, I was able to dress the twins as Little Red Riding Hood and the Big Bad Wolf, but Connor insisted on being Curious George.

Last year, I tried for the Toy Story gang - Connor really wanted to be Buzz.  In my stupidity, I asked the twins what they wanted.  Duh. I ended up with Dora and Handy Manny. Hmpf.

This year, since the Buzz costume still fit, I was pushing for Woody and Jessie for the twins.

But Connor wants to be Phineas, of Phineas and Ferb.

And the twins - well they got ahold of a costume catalog, and want to be.... everything.

Strawberry Shortcake, the Yellow Wiggle, a pair of crayons, a dragon,
a witch, 3 different princess, you get the idea. 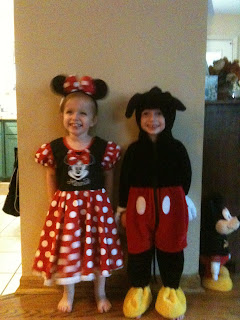 Gina Kleinworth said…
How cute!!! Halloween is going to be so fun for you guys this year! My kids keep changing their minds. I also had to have the talk with my 13 year old that he's probably too old at this point- he took it better than I thought he would.
September 27, 2011 at 1:15 PM