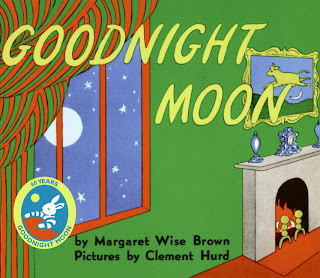 I apologize for not actually taking a picture of our book, but Colin wanted to take it to school today.
This is one of those books that I have read over and over (and over) to the kids.  The words were quickly seared into my memory, and I no longer needed the book to be near me.  It was a bedtime staple for quite awhile during the winter, but then someone took it downstairs, and it was placed with other books, being casually forgotten about in the way that toddlers and preschoolers forget about things.
The other day, Colin found the book in the family room.  He was so excited, you would have thought the Wiggles had appeared in our house.  (If you know Colin, you know how much he loves the Wiggles. And by loves, I mean obsesses about....)
So at bedtime, they were told no stories, since we stayed up late watching Minnie's Masquerade.  But Colin pulled out Goodnight Moon, and he is so cute when he asks for things.  So the twins grabbed their loveys and sat beside me while I read the book.  When I finished, Colin took the book to bed with him.  Then I went in to say good night to Connor.  He wanted a story, and he too wanted to hear Goodnight Moon.  So I laid down beside his bed, and started to recite from memory.
He objected, since obviously there was no book in my hands.
Keith was in the doorway and told Connor that I used to read the book to him so many times when he was a baby that I didn't need the book.
So I began:
In the great green room........
Then Connor said:
Let me do it Mommy.
There was a telephone
And a red balloon
And a picture of....
Ok, Mommy, your turn.
It went on like that for the whole story, I would recite a line or two,
then Connor would follow with the next couple of verses.
And that, my friends, is the ultimate happiness.

Susan Anderson said…
I used to read this book every night to my little ones. they loved it! And those were wonderful times together.

Coffee Lovin' Mom said…
Very sweet - we love that book here too. I opened your page and thought what a fun fun blog - very colorful and great layout! Totally coming back
April 12, 2011 at 11:53 AM

QueenScarlett said…
One of our our favs.