April 25, 2011
Haven't uploaded all the pictures from yesterday, but here are a few that I took on my phone.

The Easter bunny brought Colin a stuffed Donald Duck.  He is obsessed with Donald, although I don't know why.  I think it's because Connor loves Mickey Mouse, and Keira loves Minnie and Daisy (I love Minnie and Daisy so much, Mommy).  The plan was to get Daisy for Keira (to go with the Donald), and Connor needed Pluto to go with his Mickey.  However, the Easter bunny was dismayed to find out that the Disney store was out of Daisy Duck.  In fact, they had nothing with Daisy in the entire store.  So Keira got another Minnie, but this one was wearing a red dress instead of pink, so Keira didn't mind.

And in typical Connor-fashion, he wanted to hold his Mickey and Pluto up by his ears like a reindeer.  (Hey - it made sense to him!) 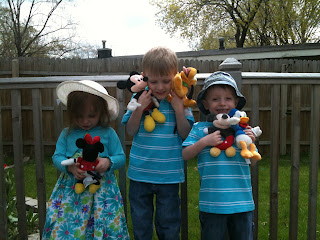 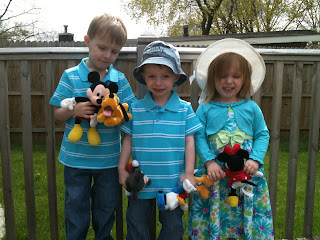 Unknown said…
Hi!! I'm stopping by and following from A Not So Moody Monday Blog Hop. I hope you'll check out my blog Frazzled Mama at http://frazzled-mama.com and follow me back. Have a great week.
April 25, 2011 at 10:58 AM