Starting the day off right... 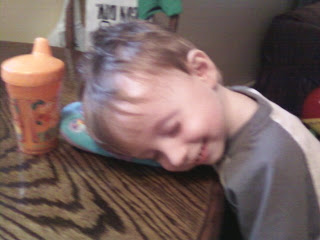 This is Colin the other night at dinner.  (Sorry it's blurry.) The twins like to pretend they are sleeping at the dinner table, usually while they are eating.  (I've mentioned before my kids are weird.)

Colin had been wearing his cousin's blue fairy slippers (don't ask), so he took them off and put them on the table, and pretend to sleep.  If he wasn't grinning, it would be hard to tell he was faking it.

I'm playing along with Leigh today.

Speaking of Colin, he has developed an obsession with his pajama shirt.  If he wakes up in it, it is hell trying to get it off.  This made for some crabby mornings at 6 a.m. when I was trying to get the kids dressed for school.

Did you know that my children only want Mommy to get them dressed? Change their diapers? Put their shoes on? Put their coats on?  While Daddy gets to stand around and do, well, nothing.

Anyway, I started putting Colin's shirt that he would wear to school on him the night before.  Voila! He is happy in the morning.  Well until I try to put his shoes on...

Unknown said…
That's so cute. My cousin's son likes to play sleep statues, where you yawn, then freeze in a sleeping pose!
September 28, 2010 at 9:38 AM

Unknown said…
cute! We used to have problems with pajamas during the day...my daughter would wake up and want to wear her pajama top all day...which was fine with me until she hit school...so then I had to adopt a different way of thinking...I would have he take her bath at night, and then before bed would have her put on the shirt she wanted to wear the next day....we did have a few instances where the pajama top made it to school...but overall it worked out really good!
September 28, 2010 at 12:38 PM

Quadmama said…
Cute! My girls are the same way about always wanting Mommy to help. One day I actually said something along the lines of "Daddy is right there. Ask him to help!"
September 28, 2010 at 6:12 PM