Our first hospital stay, part one

March 15, 2010
My luck just won't get better with illness this year. The twins both started with runny noses on Friday. Colin was up a lot in the night, just fussy and restless. He had a slight fever so I gave him some tylenol and ended up hanging out with him most of the night. He was up at 5:45 a.m., still fussy, not hungry, not himself. He was so crabby and tired, I put him down for his nap at 7 a.m. By 8, I knew something wasn't right. His breathing was labored and he just didn't look good. The peditrician has hours on Saturday, so we called and they told us just to bypass them and head to the E.R.

After a nasal swab, chest x-ray, and an hour of sitting with a lethargic baby, the diagnosis = RSV. The doc was nice and explained everything to me, but being a mom of preemie twins, I was already pretty knowledgeable on what RSV was. And based on his O2 levels and the way his tummy was expanding when he was breathing, I knew we were there to stay. I had to give him an hour long breathing treatment - of which he screamed and fought for the first 25 minutes. He tired himself out, and then slept the rest of the treatment. After that, he did cheer up a bit and felt well enough to eat some fruit loops, although he was quite upset that I did not have milk for him. :) 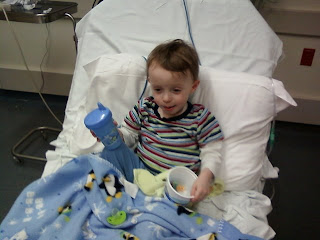