January 06, 2010
Working in education does have its fine points. The school closes between Christmas and New Year's, so I get some time to pretend I am a stay at home mom. Ignoring the fact that my pleurisy still hasn't gone away, Keira's sinus infection, the fact that Connor may have to go to kindergarten in diapers because he hates potty training, and the 1,000 hours of Wiggles watched, it was a really great time. Oh and don't forget the 18 month well-baby visit for the twins. 2 parents, 3 toddlers and a doctor with needles crammed in a 12x12 room. Good times. When I tried to stop Colin from removing the contents of the garbage can, he bit me on the stomach. The mark lasted for a week.

The Wiggles thing has to do with Colin. He's got these two teeth that just won't pop through, so he is in a major good mood most of the time. The ONLY thing that will stop his whining (besides his pacifier and eating) is the Wiggles. He is pretty smart for his young age of 18 months. We are simply not allowed to watch the same DVD twice in one day. I made the mistake of trying to play "Big Red Car" immediately after we just watched it and quickly learning my lesson. Colin was so mad he threw the DVD case at the television.

My only wish is that it would not have been sub-zero weather out while I was on break. It would have been nice to get out of the house. Although I don't know where I would have taken 3 kids ages 3 and under in the middle of winter besides the mall. And that's just a crazy idea.
***********
Here is a cute picture of the 'bag lady'. Keira has taken to carrying any bag she can get her hands on. When Keith took her to urgent care for her sinus infection, she had to bring her purse, complete with cell phone and credit card. 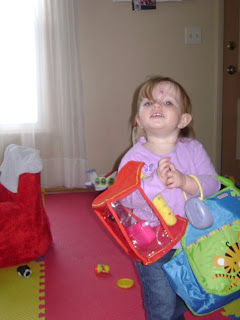 Yes my son is small enough to fit into a gift bag: 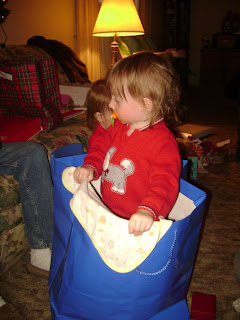 Connor, with his favorite present before he realized Santa also brought him the Mickey Choo Choo Express: 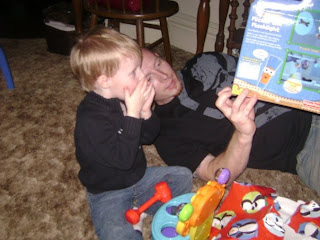 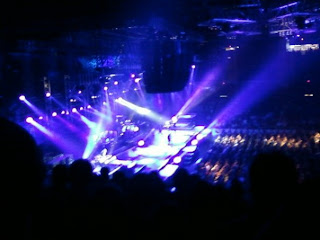 Keith surprised me with tickets to see the Trans-Siberian Orchestra the day after Christmas. Best gift ever!

Unknown said…
Thanks! I really hope it happens soon. :) 3 kids in diapers is pretty expensive - which I am sure you know better than me having four!
January 7, 2010 at 4:00 PM