A different kind of milestone

June 17, 2009
Connor will be turning three in a matter of weeks. Last year at this time, I was so worried about him, with the twins' impending arrival getting closer and closer, that my goal of no boo-boo (pacifier) after age 2 kind of disappeared. Now this boy has never had a lovey or a particular blanket or stuffed animal that he had to bring everywhere with him. But it got to the point where people thought the boo-boo had been permanently attached to his face because he ALWAYS had it. At one point, around 18 months, I tried doing that only nap/bed time thing. But without complete support from those darn daycare providers (aka Nana and Grammy), it didn't work out too well.

And right before the twins were born seemed like a lousy time to start trying again. Once they came, life was too crazy to worry about it, and it was just easier to give him the boo-boo rather than deal with three kids crying. (Because apparently I was blessed with a set of twins who love to make their feelings known through screaming.)

But now, he's almost three. He is signed up for preschool in the fall *pending potty training*. So we had to lose the boo-boo. Two weeks ago, I left a note for Grammy that over the weekend Connor would not be getting the boo-boo for nap time. On Saturday, I told him no boo-boo at nap time. And he was ok with it. And actually napped! It was a miracle! Now on Sunday, he chose not to nap, but didn't cry/fuss/fight for his best friend, but rather sat and read some books for awhile. That night, I tried putting him to bed without it. It was relatively easy, although didn't really count because he was so tired from not napping, he fell right to sleep during the first book.

We continued not giving the boo-boo at nap and bed, although we would leave it for him on his dresser, should he wake in the night and not be consoled without it (hey mommy and daddy need their sleep!), but that didn't happen. He did promptly find it the next morning around 5 a.m., grabbed it and then went back to bed for an hour. (Again, another miracle!)

On Sunday night, we had been boo-boo free (except for those early morning episodes) for two weeks. I got brave and didn't put the boo-boo out. Both today and yesterday morning, I heard him rummaging around the top of his dresser, then I heard "Mommy?" as he came out to look for me. But he didn't ask where it was. So I guess now his boo-boo days are behind him. And I am only a little bit sad that he is losing that last little connection to his babyhood. 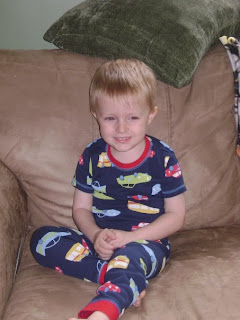 P.S. Third miracle in the making - guess who started peeing on the potty all by himself?!?! He asked about it on Friday night and has done it randomly since then. I'm such a proud momma.