Skip to main content
March 31, 2009
On Saturday, the twins went for their 9 month well-baby check-up. No shots this time, so that was nice. Keira was weighed first and came in at 19 lbs, 12.6 oz. And then there was my little peanut, Colin, at 15 lbs, 9 oz. Keira is over 4 pounds heavier than her brother! And only 6 1/2 pounds lighter than her OLDER brother. (I became painfully aware of their weights when I carried both Connor AND Keira up the stairs the other night. 40 pounds is a lot to carry up a flight of stairs!) We are also on the hunt for 3 new carseats for the van. Keira will be outgrowing her infant carrier soon (plus it's almost back-breaking to carry her around in it now anyway). Connor's current carseat will be moved to my car to replace the infant carrier, and all 3 kids will have nice Britax seats in the van.
Last week, work sent me to Philadelphia for 5 days. As much as I dreaded leaving the kids, the trip went pretty well. I got to see a lot of the city - the historical stuff and even a ghost tour! And Keith fared pretty well without me. Colin's therapist even told me what a great job he did when he brought Colin in. He made sure to send me videos and pictures of the kids, which then I cried over in my hotel room. ;)
********************************
Colin taught himself to pull up - on the stairs, on the crib, on any toy he can get his hands on. However he is not strong enough to really support himself once he gets up on his knees, so I spent the last 5 days running over to catch him before he hit the ground every time he tipped himself over. 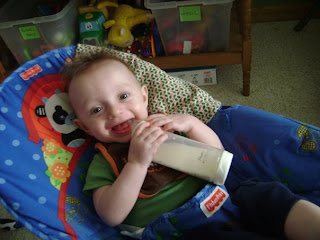 You might not be able to tell, but his eyes are like his dad's. Ever changing based on what he is wearing. In this picture, they look green. Sometimes they look blue, and yet other times they are grey.

********************************
Keira discovered the kitty door we had installed on the laundry room door (had to move the kitty litter to where little hands wouldn't find it) and now I keep finding Colin's pacifiers shoved in there. Now she prefers her thumb and will not use a pacifier if I put one in her mouth, yet she has no problem stealing her brother's to suck on. 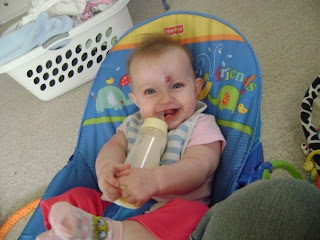 Here is my beautiful little girl with her hemangioma. We took her to a specialist to make sure it wasn't causing her any problems, and it wasn't. It should be gone by the time she gets to school. It is kind of ironic because I had one in almost the same spot when I was a baby.
********************************
However, they have learned to work together at times. When one isn't distracting me by climbing the stairs, as the other one is chewing on a toy car, they prefer teamwork as their method of driving mommy crazy: 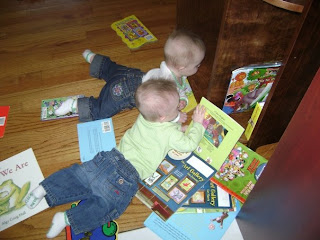 ********************************
The twins aren't the only ones growing up so fast. Connor's word of the month is "no". He uses this to respond to all questions, even when he really should be using the word "yes". However, we know when he really doesn't want to do something, because he will tell me "don't want to ...". Throughout the day, he tells me how he doesn't want to nap, doesn't want to eat breakfast, doesn't want to get dressed (he prefers to strip down to his diaper and yell, "I naked! I free" and run away from me!), and doesn't want to stay inside, even on those days where there is snow outside. Luckily though, he is pretty cute when he does say no, so I don't hold it against him. He is such a sweet little boy and is even learning to share his toys with his little sister and brother, sort of. ;) I can't believe that I will be sending him to preschool in a few months. In fact, he will be three in about four months! My baby boy is no longer a baby! (*tear*) 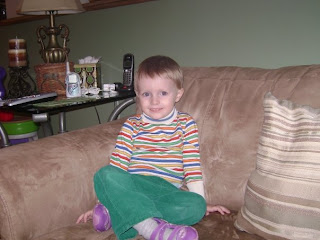 I just love this picture of him. He is wearing an outfit that I wore when I was his age (in 1979 *gasp*!) The purple shoes belong to his cousin, Lexi. He wore them home from my mom's one day after his shoes got muddy. He LOVES them. Keith HATES them. At the twins' club resale, I was able to pick up a almost new pair of Thomas tennies, so they have now replaced the purple shoe fetish he was going through.