February 23, 2009
I always thought I wanted a girl. When I was pregnant with Connor, but before I had the big u/s to see the gender, I kept telling people I wanted a girl. There were no boys in my family, my niece was almost 2, and I was used to girly things. I had no idea what I would do with a boy! Then I found out that Connor was a boy. And I was totally fine with that. The one tear I shed that day was more out of happiness that he was healthy. ;)
When I got pregnant again, I told everyone I wanted a boy. (At the time, I thought there was only one in there. Boy was I wrong!) When the tech told me that there were two babies and I (somewhat) got over the initial shock, she told me Baby A was a girl. And even then, I prayed that Baby B would be a boy. I wanted another boy. I was so thankful that at least one of them was a boy. I told people the next day that I was having twins. And almost everyone said to me, "Well now you will finally have your girl." Like that mattered. Like if it were two boys, I would say, "no thanks, not interested. I'm holding out for a girl."
The struggle was to not only find a first name that we liked, but also one that would go with the boy's name we had picked out (the boy's name we changed two days before I actually gave birth). It was either going to be Kate or Keira. I love the name Kate, but Keira is just a little different, a little less likely to be heard in the schoolyard (at least I hope so), and went beautifully with Rose as a middle name. I knew before I ever got pregnant that if/when I had a girl, her middle name would be Rose. It would be my way of honoring St. Theresa, the Little Flower. She has helped me so greatly through my life, I knew I wanted to honor her in some way. I prayed to her daily while pregnant - asking for full-term, healthy twins. Even when I pushing, I pictured a rose in my mind to assure me that the babies would be healthy, that they would be ok when born.
Little Keira came out screaming for attention, much like she does even today at (almost) 8 months old. Starting about four weeks after she was born, she decided that she needs to be entertained if she is awake. If you leave the room, she will let you know her dismay. She enjoys laughing at her big brother's toddler antics and loves to steal her twin brother's pacifier, even though she prefers her thumb when it comes to sucking on things. She has the most beautiful blue eyes I have ever seen and her smile is so engaging. Even last night, with her 2 a.m. wake-up call, you can't help but smile back at the little one laying next to you. After trying unsuccessfully to get her to go back to sleep on her own, I gave up and brought her into bed with me. When she wasn't trying to play peek-a-boo with the sheet, she would turn to me and give me one of her gigantic smiles and giggle. Now after this went on for an hour, I was pretty happy when she finally tired herself out and went to sleep, quietly sucking on her thumb. But with all the chaos of daily life and the constant struggle to find balance, those late-night times are really a blessing to me. 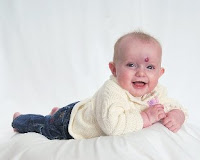